As a member of NHEC, you’re also a part-owner of your Co-op. This means that when the Co-op “earns a profit” our members are allocated a portion of that equity. This equity is first used to fund capital projects to keep our distribution system safe and reliable, but it will be returned to our members as NHEC’s finances allow. Members’ equity in NHEC is represented by Capital Credits.

We’re pleased to announce that for the first time in NHEC’s 82-year history, we will begin returning capital credits to our members.

In July 2021, NHEC will return $4 million of capital credits to our members. Current members will have capital credits returned to them as credits on their electric bills. Past Co-op members will receive checks based upon their portion of equity during the time they received electric service from NHEC. 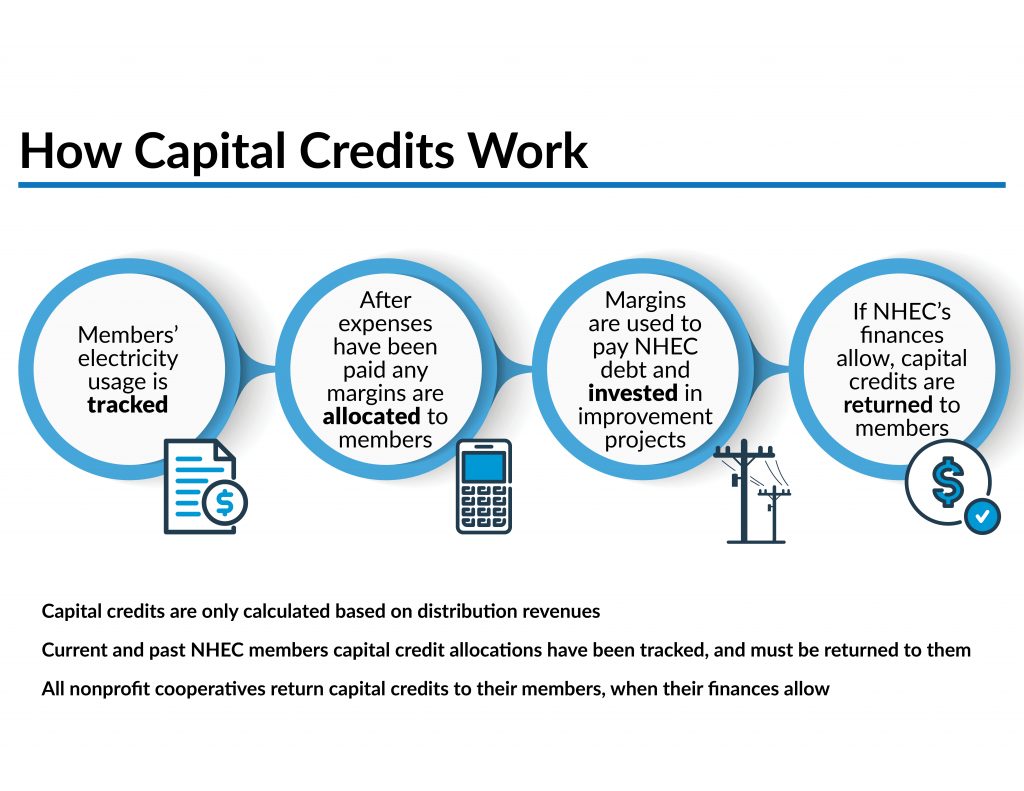 What are capital credits?

Capital credits are NHEC members’ portion of equity in their Co-op.

Co-op members are allocated capital credits when NHEC collects more money through its distribution rates than it spent in a given year. This difference would be considered profit in a traditional, for-profit business, and is also referred to as “margins.” These margins are first used to fund needed investments to NHEC’s distribution system, but will eventually be returned to the members who paid the rates.

How will members receive capital credits?

How are capital credits allocated to members?

After the end of each year, if NHEC has a positive margin it is allocated to members based upon their electric usage that year. The more a member contributes to the distribution system in a year through rates, the larger their capital credit allocation is for that year.

Why would there be a difference between NHEC’s expenses and how much was collected through rates?

There can be a variety of reasons why we take in more revenue than we spend. NHEC budgets to have a positive margin each year. This gives us financial flexibility in case of unexpected expenses, and provides NHEC with the money we need to fund needed investments to our system.

In addition, our distribution rates are set each year based upon projections of how much electricity our members will use. Weather can impact electricity usage, which can result in NHEC collecting more or less revenue than budgeted.

How are members’ capital credits tracked?

Has NHEC returned capital credits before?

No, this will be the first time in NHEC’s 82-year history that we will return capital credits to our members.

When NHEC was established in 1939, it was not the type of nonprofit, tax-exempt cooperative that required capital credit accounting. So, in the early years there were no capital credits to return. It took many years for NHEC to build a strong financial base for the organization. Any margins the new cooperative accrued were used to build the new distribution system. It was not until 1969 that NHEC became a tax-exempt cooperative that generates capital credits. However, at that time NHEC did not have margins to allocate until 1971, and for many years after NHEC had very small margins. In 1991, NHEC filed for bankruptcy as a result of its investment in the Seabrook Nuclear Power Plant. After emerging from bankruptcy in 1993, it has taken many years for NHEC to improve our financial standing and build up equity.

Can members’ capital credit allocations be paid out all at one time?

No. Capital credits cannot be returned to members all at once because doing so would negatively impact the Co-op’s finances and cause sharp increases in electric rates. NHEC uses positive margins to provide a stable, reliable electric service that benefits all our members. When NHEC’s finances permit, capital credits are returned to the members who paid the rates that created them.

Can I get paid the capital credits I was allocated for last year now?

Capital credits are not cash accounts held by NHEC. They are bookkeeping accounts, which track each member’s share of equity in NHEC. The Co-op needs access to the capital created by positive margins in order to maintain and upgrade our distribution system. When we have positive margins at the end of the year, that money helps pay for these improvements to our system. When NHEC’s finances allow, we will continue to return capital credits to the members who paid the rates that created them.

What if I am past due on my NHEC bill when capital credits are returned to members?

Why doesn’t NHEC lower rates instead of returning capital credits?

Does NHEC contact members regarding their capital credits accounts?

Yes. NHEC will occasionally contact past members to verify their current mailing address. Recently, NHEC sent a mailing to all our past members to verify their addresses. Because capital credit retirements are paid a number of years after the credits are earned and allocated to your account, it is important to always keep NHEC informed of any address changes, even if you were a member many years ago.  If you received a letter from NHEC please fill out the included form. If you have any questions, please call our Member Solutions team at (800) 698-2007.

Will I still receive capital credits if I move away and I am not an NHEC member anymore?

Yes. Your allocation of capital credits will remain in your name, even if you leave our service territory and are no longer a member. It is important that you let NHEC know your current address so we can notify you when NHEC returns capital credits.